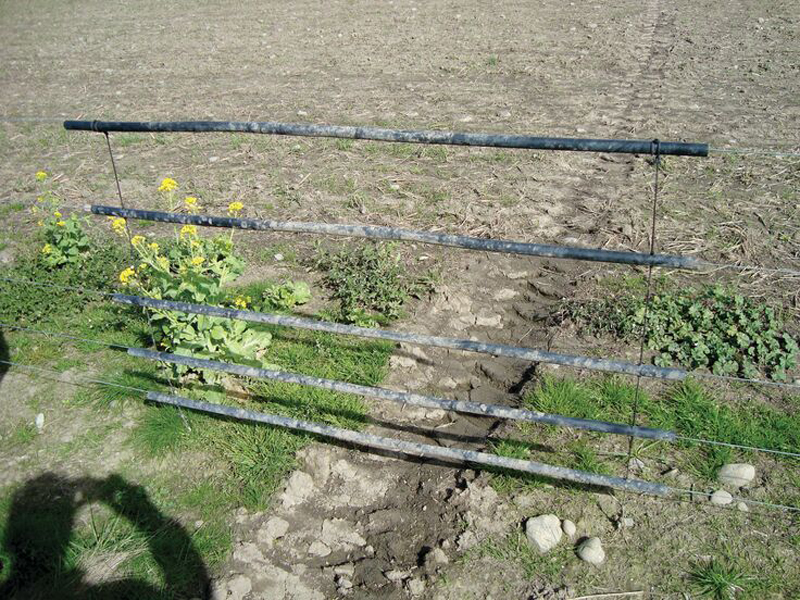 Canterbury dairy farmer Ian Hopping has done enough dairy conversions to know a good irrigator fence crossing system when he sees one.  That’s why he chose to install the new Gallagher Irrigator Fence Crossing System on his latest conversion project in the Mayfield district.

Originally from the Waikato, Ian and wife Adrienne have been dairying since 1986 and now own several dairy farms in the Canterbury region. In 1995 they moved south, where land was considerably cheaper, and started to buy drystock and mixed cropping farms to convert.

They purchased the 260ha Mayfield farm, a former sheep and cropping unit, in March 2014 and will milk 900 cows when the new season gets underway in spring.

To prepare the farm for conversion, Ian says all the old fences and infrastructure was stripped out “to give us a blank canvas”.

The farm has been refenced using mostly two-wire electrics, and a large centre-pivot irrigator has been installed to water the bulk of the milking platform. Four smaller units cover the corners. Combined, the five irrigators will water a total of 244ha.

Installing a new travelling irrigation system always throws up a few challenges – not least of which is how to get the irrigator safely across fences without affecting the integrity of the fence.

So Ian did some research before deciding on the new Gallagher Irrigator Fence Crossing System.

“I’ve used a few different spring-type systems in the past, so I know what works well and what doesn’t. What I liked about the Gallagher product was that it came pre-assembled and the springs were much more robust than other products on the market.”

The Gallagher Irrigator Fence Crossing System prevents fence wires being picked up by the irrigator as it passes over the fence. A galvanised post and rope at each crossing point keeps the system firmly anchored to the ground, and dedicated spring bays allow the fence to stretch evenly to maintain tension while the irrigator is crossing. This extends the life of the electric fence and opens up grazing management options for farmers grazing stock on irrigated pastures and crops.

Ian says almost 300 crossings have been installed on the Mayfield farm. He purchased the Gallagher Irrigator Fence Crossing Systems from his local NZ Farm Source store and says they were a breeze to install.

“They come pre-assembled with all the parts you need, so that saves a lot of time and effort when you are putting them in.”

While fencing on the Mayfield farm is still being completed, the fence crossing systems have worked well. Ian says the stronger springs on the Gallagher Irrigator Fence Crossing System prevent the fence wire from being overstretched.

“Overall, I think it’s a very effective product and it will help us to manage our irrigated pastures more efficiently.”

“It’s a very effective product and it will help us to manage our irrigated pastures more efficiently.”