eShepherd a game-changer for livestock production 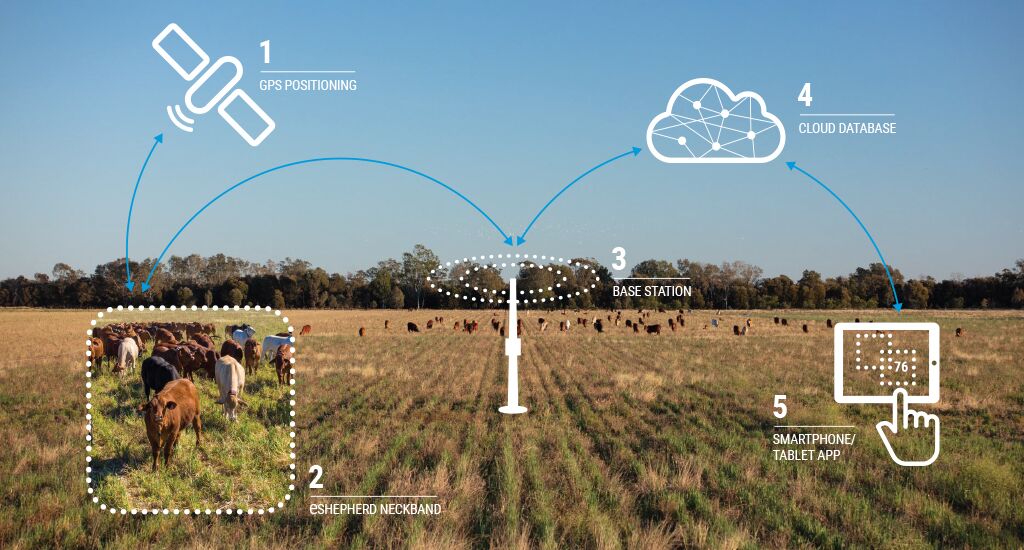 Gallagher is showcasing a virtual fencing system at Fieldays® that will revolutionise pastoral livestock operations, helping farmers meet environmental regulations and saving them millions of dollars on traditional fencing.

The development and commercial expansion of eShepherd will accelerate following the announcement that Gallagher has acquired Agersens, a leading Australian-based developer in virtual fencing technology. Gallagher first began investing in eShepherd in 2016.

eShepherd allows graziers to control the location and movement of cattle using a web application and an intelligent, solar-powered neckband connected to the internet via a base station. Testing, through a beta trial programme in Australia and New Zealand, shows the technology is proving effective in rotational grazing and the protection of riparian zones.

“The future of farming is digital and hi-tech. Farmers need tools to make their lives easier on farm and provide them with data to drive good decision making.

“There are also bigger issues at play, with farmers coming under increasing pressure to produce more with less. From animal welfare and climate change to protecting our precious natural resources, the pressure is on them as food producers.

“eShepherd is an example of the type of technology our industry needs to remain efficient, profitable and sustainable, and ultimately maintain our license to operate.”

Sarah says livestock producers with operations spanning thousands of hectares, often on hilly, remote terrain can be extremely difficult to fence. Add to that Government regulations and fencing becomes a challenging and expensive business.

“eShepherd is an exceptional example of clever, customer-inspired technology that will change the way the livestock industry manages pasture and animals. And the potential cost savings are huge.”

Using eShepherd, farmers can set up virtual paddocks and fence lines to effectively manage their stock. They create the virtual fence from either their tablet or computer using GPS coordinates on a digital map of their property.

Animals are then fitted with a GPS-enabled neckband. As they near the GPS fence, they are alerted by an audio cue from the neckband - a loud beep. If they move away from the fence, nothing further happens. If they ignore the cue and cross the boundary the neckband delivers a short aversive electrical pulse – a training approach similar to that used for a traditional electric fence.

Commercial trials have been conducted involving animal behaviour specialists in Queensland (Australia) and on a number of New Zealand properties. Results showed cattle typically learn to respond to the audio cue within seven days.

The GPS-driven interface also has the capability for farmers to create exclusions zones within the inclusion area, allowing overgrazed paddocks, areas prone to pugging or waterways within a paddock to be virtually fenced off.

All trials have been run under animal ethics approval. The technology will detect if an animal is being chased or has bolted through the eShepherd fence and will automatically turn off.

“Once the animal gets back to walking speed the system will again put a fence in front of them and start herding them back to where they should be,” says Sarah.

Farmers can set up as many virtual paddocks as they need. When cattle are ready to be moved, the farmer selects the virtual paddock destination and, if it is contiguous, the system pushes them to the new paddock from the back.

If cattle are being moved a large distance the virtual fence is simply deactivated and then reactivated in the new paddock.

Producers can currently register their interest to become part of the Beta programme. To find out more and to register your interest about eShepherd click here.