No farmer should put up with losing a tenth of their livestock to dogs – and now, the Betts family don’t have to. 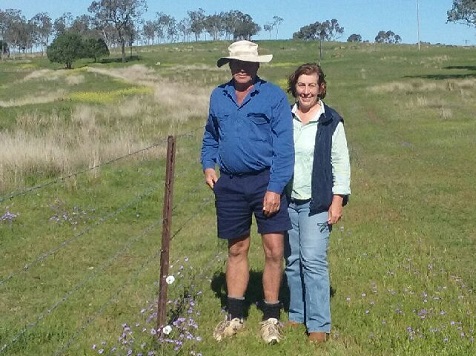 Owen Betts, together with his wife Karen and their two sons, runs 450 Dorpers on the family’s “Yalda Downs” property near Toowoomba.

“I’ve always had a preference for raising sheep. I enjoy them, I believe they’re very fast to make a dollar from and Dorpers are a hardy enough breed to raise in an area that’s almost exclusively suited to cattle.”

When the Betts family acquired the 410 acre property in 2013, the farm was set up for cattle with conventional (non-electrified) fencing used for every paddock. Initially, Owen ran cattle for a short time before switching them out for a flock of Dorper sheep.

Unfortunately, the original fences – designed for cattle – were not up to the job of keeping his new livestock safe or secure.

“We soon started to sustain big losses, and none of the measures we used to eliminate the dogs was working. It wasn’t long before we lost 10% of the flock and we genuinely believed that dogs would end up killing the whole lot if we didn’t try something new.”

Owen decided upon electric fencing as a new means of keeping feral dogs at bay. He began by retro-fitting some of the existing conventional fences with offset electrified wires, and built entirely new fences featuring earth-return systems too.

Eventually, every section of boundary and internal fencing was improved and electrified – and all powered entirely by a Gallagher M5800i Energizer.

Besides the Energizer, Owen’s new set up features Lightning Diverters, an i Series Remote Control and Fence Monitors that allow him to track the performance of individual fence ‘zones’ around the farm.

Since electrifying his fencing system, the first change has been a dramatic decline in dog attacks. Losses to the flock have dropped off steeply, providing a massive productivity boost for Owen and his family.

On top of this, the Dorpers have developed a healthy respect for the fence too, adding to the overall security of the flock:

“Besides blocking the dogs from getting to the sheep, the new setup has stopped the sheep from getting out as well. Dorpers are very hard to stop from going through fences, and they’ve now got a total respect for the electric fence – they won’t go near it.”

The power to do more

Now able to better protect his livestock, Owen believes the electric fence will allow him to tap into new productivity gains from the flock, notably through improved pasture management.

“We’re simply getting a huge amount of power out of that Energizer … enough to consider using it for temporary fencing to strip-graze pasture. That’s not something we’ve tried before but I believe it would be very easy to accomplish with our current set up.”

“We’re simply getting a huge amount of power out of that Energizer … enough to consider using it for temporary fencing to strip-graze pasture. That’s not something we’ve tried before but I believe it would be very easy to accomplish with our current set up.”