With animal identification and compliance with NAIT at the forefront of most farmers’ minds, tools that can make the whole process faster and easier are a real advantage, says Balfour farmer Katherine McCallum. 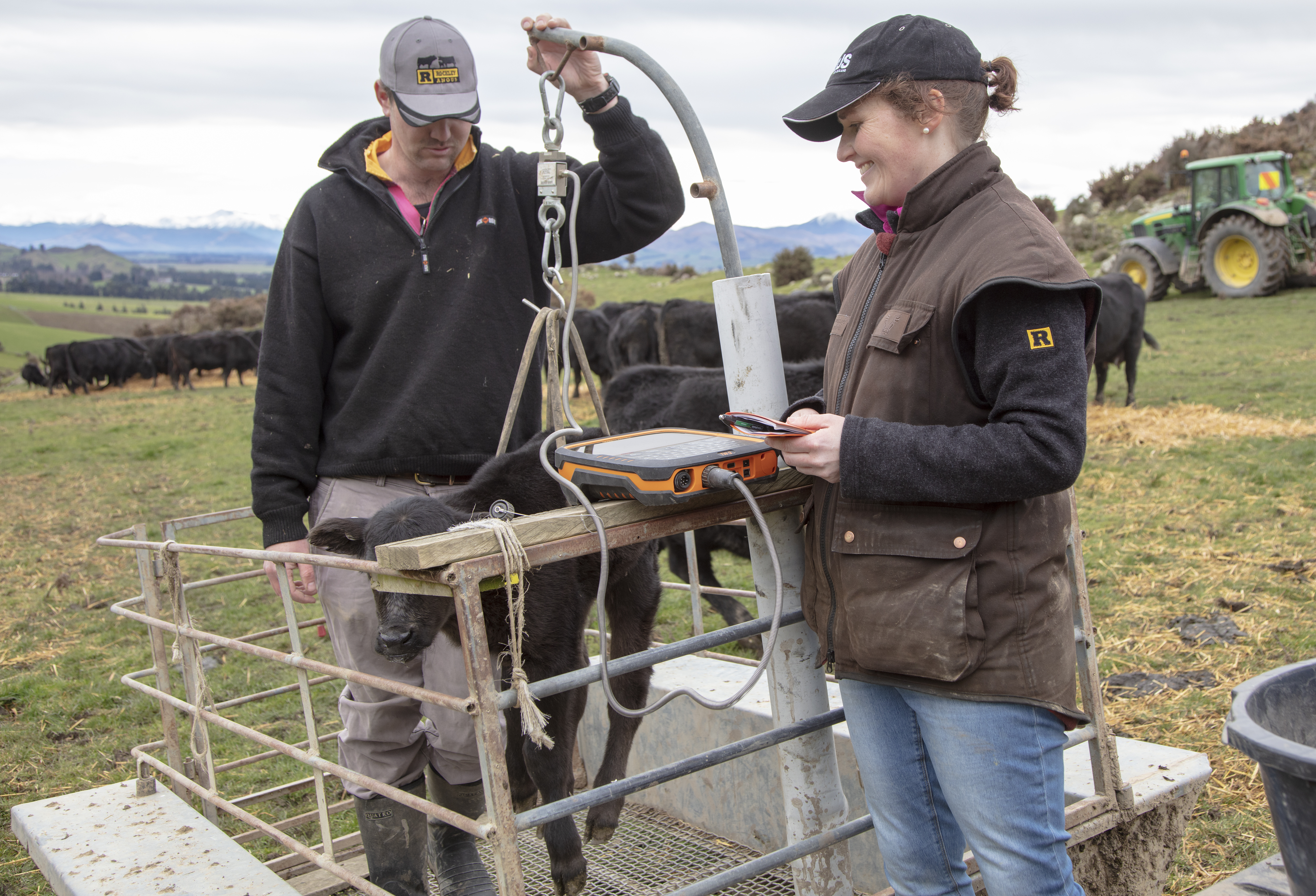 The ease of meeting compliance requirements is just one of the reasons she gives for using Gallagher’s HR5 Hand Held EID Tag Reader and Data Collector on the Angus Stud she runs with her husband Philip.

“Compliance is something all farmers have to do, whether they want to or not, and tools like the HR5 Hand Held Tag Reader make it so much easier and quicker, so why would you not use it?”

The couple run 2 businesses, with 4 entities in total; three of these are on their 319-hectare property near Balfour in Southland, comprising of dairy heifer grazing, the Angus stud and 1400 breeding ewes, including hoggets. They have also just taken over a 600-cow dairy farm which is run day-to-day by contract milkers.

“We needed a system that was fast, easy to use and durable and the HR5 delivers on all of those things,” says Kath.

The couple use the HR5 Hand Held Reader during calving season on their Angus stud, when they move stock between properties or sell stock off to be processed. She also uses it to undertake a yearly stocktake on the dairy farm, right before they dry the cows off for the season, to ensure all animals correlate with NAIT’s records and they haven’t lost any animals or had them slip off the system.

“All the dairy cow tag numbers are preloaded and at the end of the season, as they’re being milked, I go through and scan them all to make sure they correlate with NAIT.”

“You can just Bluetooth or use the cord to connect the HR5 to your phone or laptop, and after scanning the tags all the information is there to be sent off to NAIT,” says Kath.

She adds, “from my laptop I can then print a spreadsheet of NAIT tag numbers, or use the information to correlate it against what we have on NAIT.”

Kath and Philip calved 94 cows on the Angus stud this year and Kath says using the HR5, in conjunction with Gallagher’s TW-3 Weigh Scale and Data Collector, helped to give a full picture of their herd and provides them with the confidence every animal is performing to their optimum.

The couple use a portable in-paddock weighing system to weigh newborn calves, providing valuable birthweight data for their records.

“We can assign birth weights to every calf tag number born from day one, using the Bluetooth connectivity between the TW-3 and HR5 which assigns the weights directly to the tags.

“We can also load in the calf’s NAIT tag number and come weaning time when we weigh, we get a weight gain figure giving us a good indication of its Dam’s performance.”

Kath says she loves the ability of Gallagher’s hand-held tag reader to read cow’s tags from a slight distance when they come up to the calf trailer as Kath and Philip weigh and tag newborn calves, especially, she adds, if the visual tags are dirty and hard to read.

“The large LCD screen on the HR5 is awesome. Because we preload our tags onto the HR5, you can quickly scan and read them, then we can add any additional information manually if needed. It makes things so easy and why wouldn’t you want that?”

When using the TW-3 Weigh Scale, Kath has appreciated the unit’s Wifi connectivity, allowing her to download all the weighing data directly to her computer, which she can then load into Breedplan.

For the dairy heifer business when the couple are regularly weighing the heifers the data can be uploaded direct to MINDA, enabling them to have complete visibility and control about how their stock are performing.

“We can also easily identify any stock that are not performing and decide what we will do about them sooner rather than later. You can easily see if you are heading in the right direction or need a bit of a wakeup call,” says Kath.

“The HR5 and the TW-3 have given us real peace of mind across all of our businesses. It’s technology that is helping us know with certainty that we are on the right track, while ensuring all our animals are meeting compliance requirements,” says Kath.

“The HR5 and the TW-3 have given us real peace of mind across all of our businesses. It’s technology that is helping us know with certainty that we are on the right track, while ensuring all our animals are meeting compliance requirements,”