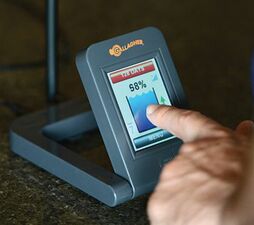 Before the Gallagher Water System

“We have 600 head of black Angus, which my parents run, while I look after the water monitoring as well as the cropping side. We concentrate on wheat and barley these days, putting in about 8,000 acres [3,240ha] each year.”

Sitting half-way between Adelaide and the Victorian border in South Australia’s Riverland, Swan Reach can be hot and dry, with a low annual rainfall. Keeping drinking water up to stock is not something the third-generation farmer wants to leave to chance.

“We’d do a water run a couple of times a week, checking stock troughs and tanks. We were spending a lot of time driving. Then, if we knew we had a problem, we were spending more time trying to detect where the fault might be."

“But checking the whole system one day doesn’t prevent a problem developing the next — and then you might not be back there for a couple of days, so won’t know until then. Sometimes, you might check the troughs and the main tank connected to that trough to make sure they are okay, but not go right up to the other tanks and check every individual tank to see what’s going on.”

“So I wanted something that would give me certainty with the water and knowing how much is in each of the tanks."

“I’d been looking around for a while for a reasonably priced, simple unit - something that’s compact and easy to use.”

“The Gallagher one fitted all those categories and it’s also extremely simple to install. I’ve looked at field days and other events at whatever else I could find, and I think this is still the best value for money.”

The Stoeckels have six units, all on water tanks, attached to three display units. The WWMS measures the water level in the tank based on pressure, sending that data wirelessly up to 10km (depending on the antennae) to the display unit.

“We have a couple of farm properties, so there’s a monitor in both of the houses and one in the main office. This way, I can just flick through those six tanks on each display unit every morning to see what’s going on, when I’m making a coffee, and go from there.”

Colin says previously, they only knew they were losing water once it had actually all been lost.

“Whereas this way, we can see if a tank is slowly going backwards and know we probably have a fault somewhere. It also gives me an indication of where to start looking for a problem too — I’m not flying blind on trying to find it."

“The units don’t need any maintenance, and, being solar with no batteries, they last such a long time without direct sunlight that there’s nothing to do on them.”

Colin says the Gallagher Wireless Water Monitoring Systems have improved his productivity, freeing up time to spend on other tasks.

“It varies from week to week, but at this stage it’s saving me an average of a few hours a week."

“So as well as freeing me up for other jobs, I’m keeping a lot closer eye on the water and can detect early indications of any problems. The units seem to be very accurate. I haven’t had a fault; as long as they are getting a signal, the accuracy is very good.”

"This way, we can see if a tank is slowly going backwards and know we probably have a fault somewhere. It also gives me an indication of where to start looking for a problem too"