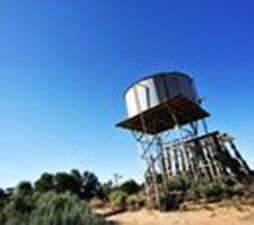 James’ great grandfather began the medium-wool Cassilis Park Merino Stud, which has a flock average micron of 19.1, in 1896. Then in 2009, the family began a second stud — Mega Merino Australia — in partnership with the Pienaar family from South Africa.

This stud, with dual-purpose 20-21 micron wool, has the sole marketing rights to Mega Merino genetics in Australia.

“They were the biggest issues: saving labour from an economic viewpoint and better using it elsewhere, and monitoring for more timely control of any problems as they arise."

“And that’s where we’re saving. In summer, it was taking Dad and I about seven to 10 hours a week. In winter, it was only a quarter of that, but it was still valuable time. Not having to do those water runs let’s us get on with more important tasks.”

James says aside from the productivity in better labour use, is the efficiency of problem finding and time lost.

“When there’s a problem, we’re not losing time and water because we’ve picked up on it straightaway and can rectify it before it’s a disaster"

“Where the main tank sits is hilly country; it’s not transmitting line-of-sight, so we just got the extension aerial that can come with it. On our place this would be the hardest reception area, and it’s working no problems."

“It’s a one-off payment with no ongoing costs, so that was a positive. But also it’s expandable. Our plans are to add a pump controller and another tank monitor. You can easily add that to it, to make it even more efficient. That was a good thing, you buy it and then you can keep adding to it over time.”

"With this Gallagher water monitor, if we see the tank level going down quicker than it should be, we can fix it before we’ve lost 10% of what we would have previously lost. And that’s a huge benefit.”