For David and Annabelle Horn, fencing became a numbers game. 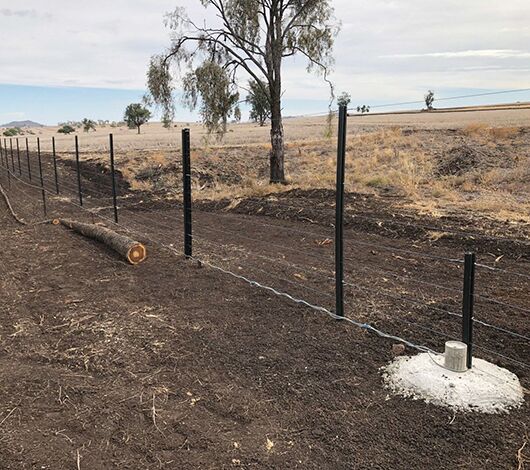 For David and Annabelle Horn, fencing became a numbers game. Pigs were taking 20-30% of newly planted chickpea crops – and coming back pre-harvest – along with up to 60 tonnes of what should have been 1,500 tonnes of harvested sorghum every year.

David says, “Working on about $60 for every acre we own to get a fence right round ourselves, the numbers don’t take very much … $60 to me seems like a fair investment to get productivity off every acre, not just 80% of it … so it’s not a very hard equation.”

The couple has run the 2,228-hectare (5,500-acre) “Millgalarr Pastoral” across a couple of blocks since 2004, at Warialda in the New South Wales North-West Slopes region, very close to Gunyerwarildi National Park.

“We conservatively spend six or seven grand a year on helicopters trying to control pigs. We make ourselves feel good doing it – but we’re not winning.”

In 2014 the Horns began putting in Gallagher Westonfence.

“We’ve were probably working on it for about three or four years, trying to decide what to do.

“I said to a fencer friend of mine who fenced for me all the country that I used to manage at Bungunya in Queensland: ‘I don’t care what I build, I just don’t want any pigs on my crops.’"

“So with that, we went and saw a neighbour who had some [Gallagher] Westonfencing and he was really excited about how well it went. Probably what sold us was his workman who had about 30 sows fenced off behind [Gallagher] Westonfence. He’d had one wild boar in there in three years. We reckoned that was as good as it was ever going to get, so we just went ‘righto, well that’ll do’ and away we went.”

With eight kilometres of boundary Gallagher Westonfence already done, by the end of 2017 the Horns aim to have finished 15km, gradually working to do the entire 40km.

“We began doing the two sides that are the worst, and then we’ll slowly go round ourselves.

“The first 3km we did has had two crops right up against it and right up against a mountain that is full of pigs. The first year we had absolutely no animals come into our crops, but they’re smart, so they started walking about 4km around it and coming into a dam for water. That will stop when we finish the boundary. The only pigs that are actually going through it are getting pushed through it by people, a ute, a dog or helicopters. We won’t claim it’s 100% but if you keep it running well, it’s certainly in the high 90s.

Power behind the fence

The Horns are using nine-wire D9 XL Insulated Suspension Posts (ISPs), that are 1,650 millimetres high. ISPs are spaced at three metres, with a steel post every 9m and every third steel post is a 2.7-metre tall maxi post.

“I’ve got a  Gallagher M10,000i Energizer punching one fence at the moment, and an old 50-Joule unit – a Gallagher MR5000 Energizer – punching the other, but that’ll get pensioned off as soon as I hook more fence up; I’ve got another M10,000i at home ready to go. The M10,000i is beautiful because you can turn it off anywhere. It’s a very good bit of gear. It’s only a matter of looking at the Energizer and you know that it’s ticking along and everything is good. If I want to, I can get data sent to my phone, so every time I jump in the ute I can see what’s going on."

“We worry about the other type of fences and if they’re still stock proof once all the pigs bash holes in them? Do you go and fix them or are you busy, and then when you’ve actually got to go and fix them, how much have you got to do to them?

“If you hunt a pig and put enough pressure on it, it’ll get through the fence. But it’s a plain wire fence so there’s no damage. The maintenance on these [Gallagher] Westonfences is really a lot less than fabricated fencing. That’s one of the beautiful things about this fence. Long-term that’s really good.”

On top of its effectiveness at keeping out feral pigs, David says the Gallagher Westonfence has also been low cost.

“I’ve had friends tell me they’re spending 12 grand for materials for a 1.8m-high fence with an A-frame, and then, of course, that’s going to be dear to put up. This Westonfence is well under half that and it’s also low cost to put up. I think it’s quite competitive. It’s a good return on investment for sure.”

“Pigs are worse than any other feral animal for damage. We were giving so much away of our crops before the [Gallagher] Westonfence boundary fence. It works so well that once we’ve gone round ourselves entirely, then we’ll start using it for internal fences.”

It’s also easy to put up.

“We’re helping our contractor and the more we do, it the easier it gets. We put 2km up the other day in two short days, with three labour units, and that included it going with an Energizer on it. I find it very easy to deal with putting it up.”

The result for the Horns is that they’re not losing valuable crops, hence income, to feral pigs.

“Pigs are worse than any other feral animal for damage. We were giving so much away of our crops before the Westonfence boundary fence"