The morning Ian Bell came out to find 35 sheep mauled by wild dogs, he thought seriously about giving up. 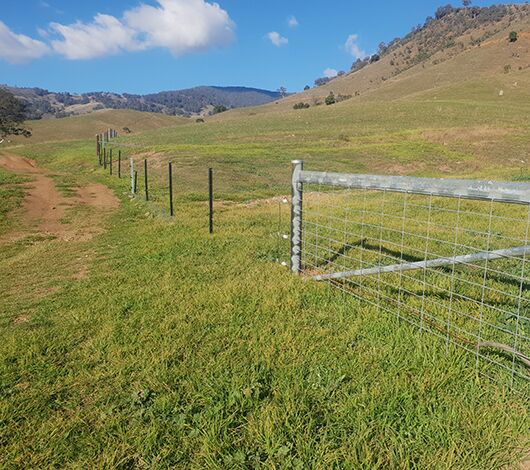 “We were getting regular attacks, but just in one night, I lost 27 lambs and eight ewes. It was just devastating – the worst time of my farming career. The worst thing that can happen to a farmer is to go out and have to put down stock that are maimed.”

Ian and his wife Lise farm 450 hectares at Tooma on the eastern edge of the Riverina near the Snowy Mountains region.

“Willow Vale” runs 1,250 first-cross ewes, with lambs mainly heading to the sucker market, and 150 head of Angus breeder cattle, turning off weaner calves. The middle of the farm has a vineyard planted to Chardonnay, Pinot Noir and Sauvignon Blanc.

Ian was brought up on “Willow Vale”, and has been running it for 40 years, after buying out his siblings and adding some land next door.

“But after that bad attack, I had to make a decision.”

“I thought about going out of sheep, but we’d put in new yards, so were really well setup for the sheep, plus the country lends itself to prime-lamb production. Then one of my neighbours rang up one day and said, ‘there’s a wild dog chasing one of your newborn calves, and the cows are having a hard time’.

So I thought there’s no use going out of sheep, we’ll have the same problem, so that’s when I started looking around for a better solution."

“With some dogs being shy of traps and poison, they weren’t going to be long-term fixes, so fencing seemed to be the way to go. A couple of people in the district had put electric fencing up, so I had a look at that."

“I had 8.5 kilometres to put up, so because labour’s your big component in fencing, I thought I needed a simple system that would be easy to use. The Gallagher Westonfence was the best option.”

High pressure to no pressure

While “Willow Vale” is close to national parks, a lot of feral pressure was also coming from nearby and adjacent pine plantations.

So not only did they need to keep wild dogs out, the primary-production business was also facing pressure from foxes hunting lambs, kangaroos eating grass and wombats nullifying fencing.

“While foxes badly affect your lambing percentages, some nights – particularly on one block – you would see anything up to 100 roos. Wombats are a problem here because they wreck fences by burrowing underneath them, and then make holes that let the roos come through.”

“We did a sloping fence because I’ve got good fences, so I was fortunate the neighbours let me put it on their side, where the pressure was coming from.”

“I thought I can probably deal with that, as long as it keeps dogs out. But I don’t get roos come over it. And what’s more, there has been no more trouble with wild dogs. It just stopped. The [Gallagher] Westonfence has been excellent.”

Proper planning and set up

Ian says the key is proper planning and set up.

“Brendan explained the system to me, then his guidance was really important in where to site the fence, during the installation and setting up the Energizer.

“A kangaroo hasn’t got reverse, they just charge forward, so it’s pretty important to put it up where you’re getting the pressure from.

“Brendan guided me towards the Gallagher M10,000i Fence Energizer. I think that’s the key too: heaps of power. We saw that when we did a field day here in May – we even had guys from Mudgee and around Orange come to see how effective it is.”

Ian found the fence quick and easy to put up – important once he’d chosen that as the method to exclude the devastating ferals.

“We built up a trailer with a couple of wire spinners, and I just had one person helping me; we got a good routine worked out very quickly.

“The Insulated Suspension Posts don’t move. I put the High Tensile Fastening Clips on the hot wire, the second wire up from the bottom. There’s no way known you can move the post; it just won’t slide along the wire. Even if anything hits the fence, they still don’t move.”

Along with the complete about-turn in stock losses due to wild dogs and foxes, the fence has resulted in some far-reaching benefits in farm production and Ian’s time use.

“I don’t have to put down maimed stock; there’s just none of that, which is such a relief. Our lambing percentages are much better, and with the price of lambs today, you don’t want to be losing any to foxes. So that’s another thing to put in the equation when you’re looking at the economics of putting the fence up.

“But now we have all the extra feed too. Paddocks aren’t getting hammered by kangaroos. My maintenance on all this fencing is virtually non-existent now. I don’t have all the repair jobs that I used to have. So there’s a big saving there as well. I think that’s very important too: people can factor that in when they’re looking at the economics of this fence because that’s a huge plus.

“One thing that I do, just two or three times a year, is go along and spray out underneath the fence, to stop longer grass causing leakage. It doesn’t take long: I’ve got a side-by-side, put a tank in, and just go along for a few hours. That’s it.

“An electric fence has got to be done correctly. I’ve seen some people who haven’t done it properly, then they get frustrated that they’ve got problems. It’s most important to do it properly first up, then you won’t have any problems. And I’ve had great support from Gallagher to do just that.”

“I don’t have to put down maimed stock; there’s just none of that, which is such a relief. Our lambing percentages are much better, and with the price of lambs today, you don’t want to be losing any to foxes. So that’s another thing to put in the equation when you’re looking at the economics of putting the fence up."