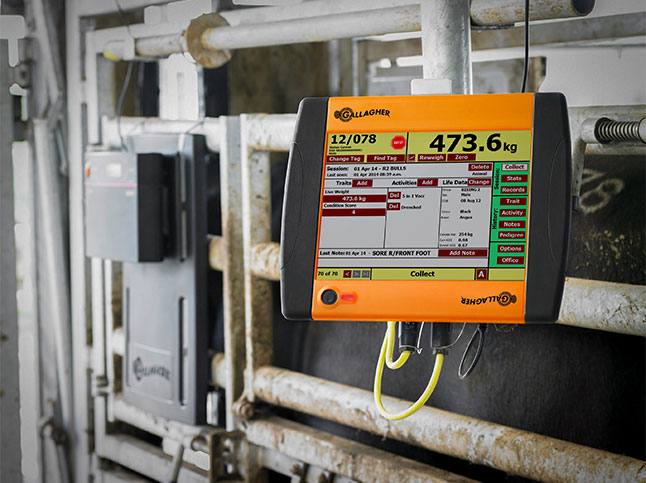 To be launched at the 2014 National Fieldays, the TSi 2 succeeds the ground-breaking SmartTsi which was released in 2008.

The only touchscreen-operated integrated weighscale, computer and animal management system on the market, the TSi 2 Livestock Manager boasts a processor that is twice as fast, enabling it to analyse data and record stock weights with incredible speed and accuracy.

Gallagher Product Manager Dan Loughnane says the improvements to the TSi 2 are the result of extensive research involving considerable consultation with farmers. “The TSi 2 has significantly more memory and power and this means it can quickly store, analyse, and transfer animal data right in the yards.”

It also locks in animal weights much more quickly during weighing sessions. “For example, the new Fast Weigh feature has been specifically designed for weighing sheep and enables weights to be locked in up to 2.7 times faster than in standard mode. This makes it possible to achieve big increases in stock throughput.”

Another key improvement to the TSi 2 is the introduction of WiFi connectivity, allowing animal data to be immediately transferred to the web. “This is ideal for farmers who want to quickly send information directly to third parties such as NAIT.”

Dan says the increase in processing speed and memory makes it easy for farmers to find information quickly and with minimal fuss. With its larger memory, the TSi 2 has the capacity to store over one million animal records, meaning the entire life history of animals can be saved for on-farm viewing.

It is supplied with Gallagher’s Animal Performance Software (APS Professional - valued at $1378 inc GST), a comprehensive stock analysis tool that helps the farmer make well-informed management decisions based on the collected animal data. Like the SmartTSi, the TSi 2 is ruggedly constructed to handle the toughest of farm conditions. It can be fully integrated with loadbars, EID readers, auto drafters and other management software.

“The TSi 2 has more memory and power - it quickly stores, analyses, and transfers animal data right in the yards.”