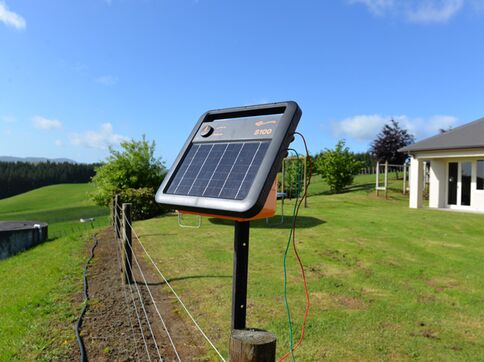 Farmers requiring more kick from their portable fencing unit have their needs met with the new Gallagher S40 and S100 Portable Solar Energizers.

Available now, the S40 has incorporated all the features that have made the S10 and S20 models so popular, but with greater output and some thoughtful additional features that add to its versatility and usability

"The S40 can hold double the stored energy of the S20, at 0.4 joules and is suitable for typically fencing up to 1.5km or around 2 hectares of land," says product manager Brian Rose.

He says a key impetus behind the S40's design was to ensure it was capable of powering portable multi-wire fences used to contain sheep in break feed situations.

Available from April, the S100 marks a higher powered, practical step up in Energizer capacity that incorporates the smart design specs found in the S40 with 1.0 Stored Joules of energy and powering up to 10km of fencing,

Like the S40, the S100 has mains recharge capability to ensure it can be up and running straight out of the box.

"The smaller units have proven extremely popular, and we are confident the S40 and S100 units are going to generate a lot of interest.

The units include a "dual mode" capability where it can work on half power and high pulse rate constantly, or can operate on full power during the day, switching to a longer pulse rate at night when animals are not as active.

The high quality 6-volt (S40) and 12-volt (S100) battery is capable of powering the unit for up to three weeks without sunshine, and a smart control system ensures that if battery output declines the energy output will adjust accordingly until the battery is charged up again. Battery health is clearly visible via a battery status indicator.

While developed as a portable model, Brian says it would be possible to set up the S40 and S100 semi permanently, thanks to a well-positioned mounting point that offers 360-degree mounting capability.

The design also has a "charge and go" ability, thanks to the mains charging adaptor being contained in the back of the energiser unit for convenience.

"The S40 and S100 is extra convenient in that you can fully charge it off the mains power rather than having to charge it up a couple of days before in the sunshine," says Brian.

With a rugged waterproof casing and UV tested plastic body the S40 and S100 have a pedigree of long lasting, field proven design backing up its smart electronics.

The S40 and S100's proven Gallagher design and electronics also comes with the peace of mind of a two year warranty.